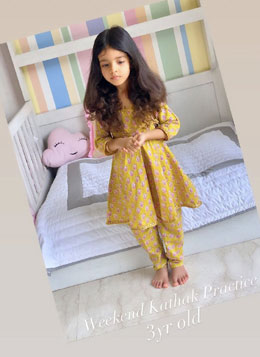 Here’s the cute little Arin, daughter of former heroine Asin Thottakkal. The actress took to Instagram and shared this adorable picture, also saying that the picture was taken while the 3-year-old Arin was busy in her weekend Kathak classes.

Asin fell in love with Micromax co-founder Rahul Sharma and the couple tied the knot in January 2016 in a Christian wedding followed by a Hindu ceremony. Arin was born on 24 October 2017. Asin’s last film was the 2015 Bollywood comedy, All is Well.