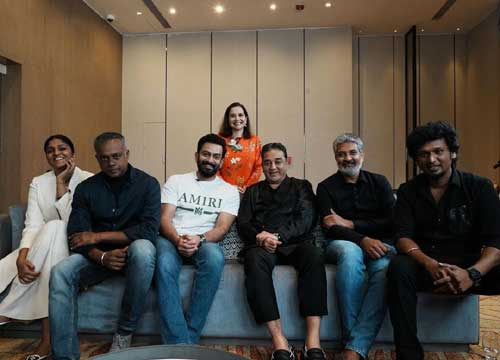 South cinema has been on the dominant side in recent times, and the audiences had some memorable experiences this year. They have witnessed some crazy entertainers in the form of RRR, Vikram, Sita Ramam, and many others.

Today a picture surfaced on social media, which became viral within no time. Seen here in the image are the south cinema legends Kamal Haasan, SS Rajamouli, Gautham Vasudev Menon, and Prithviraj Sukumaran. Also, the blockbuster director Lokesh Kanagaraj and Mahanati producer Swapna Dutt were present in this frame.

The fans were very delighted to see some of the great legends in a single frame. All these celebrities participated in a discussion hosted by a private entertainment website. Accordingly, these filmmakers spoke about the art of making popular cinema and the kind of films they wished to make.