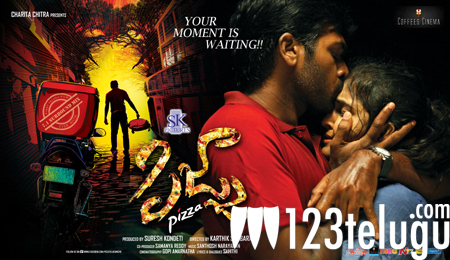 Fully banking on the uniqueness of the number ’12’ the team of ‘Pizza’ has decided to launch the audio of the movie on 12-12-12 at 12:12:12. Pizza, a blockbuster hit in Tamil, is ready to entertain Telugu audience with its dubbed version.

Speaking on the occasion, Naga Babu claimed that even if the same director had done ‘Pizza’ directly in Telugu, this film wouldn’t have been on par with its original Tamil version. The mega brother further said that he had agreed to lend his voice to one of the characters upon Producer Suresh Kondeti’s insistence. Naga Babu admitted that Suresh’s decision as producer was bang on.

Suresh Kondeti expressed his joy on releasing the film which was the first one to complete dubbing process in ‘Santosham’ studios. He was confident that Pizza will turn out to be a super duper hit in Telugu too.