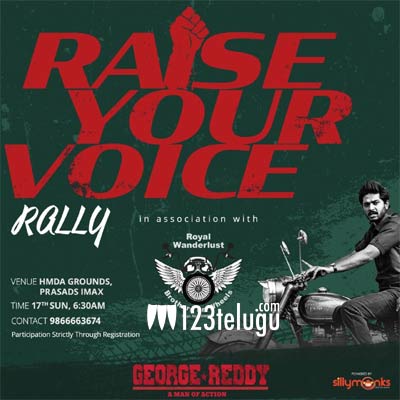 In an unexpected development, the Hyderabad Police denied permission for the upcoming campus drama George Reddy’s pre-release event, which is scheduled to be held at Necklace Road tomorrow evening. The permission was denied due to the presence of Pawan Kalyan as the chief guest of the event.

The cops reasoned that Pawan Kalyan’s and several student leaders’ presence will attract a large number of fans, which may lead to a law and order issue. However, to step up the promotions, George Reddy’s team will organize a bike rally at the HMDA Grounds near Prasads IMAX at 6:30 am.

George Reddy is a biopic on the slain OU student leader George Reddy. Sandeep Madhav has essayed the titular rule in this Jeevan Reddy directorial. The film hits screens on November 22nd amid high expectations.