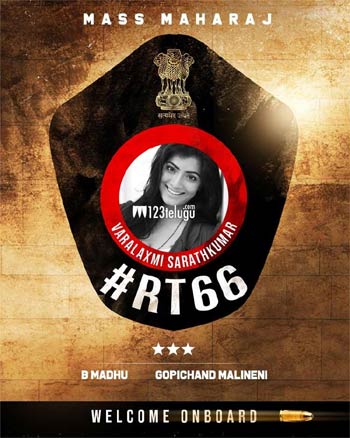 Ever since Gopichand Malineni confirmed that he is going to direct Ravi Teja’s next film, he has been posting updates about the film on a regular basis. Initially, the team announced that Shruti Haasan is going to romance Ravi Teja in this action entertainer where Ravi Teja will be playing a cop, and now, another popular Tamil actress has joined the cast.

As per the latest news, Varalakshmi Sarathkumar has been chosen to play a key role in the film, and it is going to be her second Telugu film after Sundeep Kishan’s Tenali Ramakrishna BA BL. Confirming the news, Varalakshmi said that she is thrilled to be part of Ravi Teja’s next and that she is looking forward to the shoot.

In recent past, Varalakshmi had made quite a name for herself as the main antagonist in Vijay, Murugadoss’ Sarkar, and she has played key roles in numerous other Tamil films. Now that she is making her foray into Telugu, it remains to be seen what sort of impact is she going to make here.

To all my loving Telugu fans out there… here’s my next with @RaviTeja_offl @megopichand @MusicThaman happy to be on board… looking forward to it..!! #RT66 pic.twitter.com/LC0rWUGRua