Power-packed Vakeel Saab trailer all set to create a never before record
Published on Mar 30, 2021 7:07 am IST 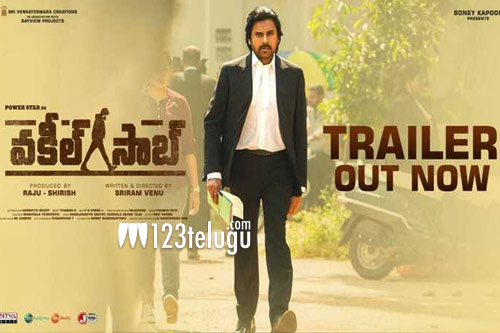 After over 3 years, star hero Pawan Kalyan is making his acting comeback with Vakeel Saab. Needless to say, the hype and expectations surrounding the film are sky-high. The craze for Vakeel Saab is evident in the sensational numbers the theatrical trailer is registering on YouTube ever since its launch yesterday evening.

Vakeel Saab’s trailer has already surpassed the 1 crore views mark on YouTube. Furthermore, the trailer now has nearly 800K likes and is inching closer to the 1 million likes milestone. This is a never before seen record for any Tollywood film trailer.

Pawan Kalyan’s trademark swag, his conflict with Prakash Raj as lawyer Nanda and the intense drama featuring the film’s leading ladies Anjali, Nivetha Thomas and Ananya Nagalla are the major highlights of the trailer along with Thaman’s solid background music.

Directed by Sriram Venu, Vakeel Saab has been bankrolled by Dil Raju and Boney Kapoor. The film is slated for release on April 9.