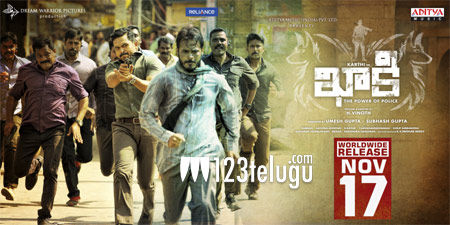 The teasers of ‘Khakee’ already reveal that the film is going to be an out and out cop drama. Karthi is playing a very powerful cop in the film and his performance is said to be the biggest highlight of the film.

H Vinoth of “Sathuranga Vettai” fame is the director of this movie. Umesh Gupta and Subhash Gupta of Aditya Music Pvt Ltd are bringing this film to us in Telugu.