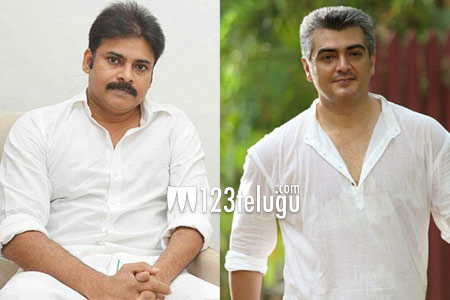 Powerstar Pawan Kalyan’s Katamarayudu is turning out to be quite a biggie in Tamil Nadu, despite the fact that it’s a remake of Ajith, Tamannaah starrer Veeram. We had recently reported that the film’s rights in Tamil Nadu were bought for Rs 90 lakhs, a record sum in itself. The latest news is that hundreds of Ajith’s fans have come out in support of the film.

For the past few days, Ajith’s fans have been tweeting in support of Katamarayudu and several fan clubs have reportedly put up massive cut-outs and posters wishing Katamarayudu a big success in Tamil Nadu. This is truly unprecedented and it shows the close bond which Pawan Kalyan and Ajith’s fans share, given how similar the two stars are in their respective industries.

The film itself is going to have a big release in several parts of Tamil Nadu. In several multiplexes in Chennai, the film has been given maximum number of shows and the situation is said to be quite similar in other important centres across Tamil Nadu. In Chennai, several early morning shows have been planned. Directed by Dolly, Katamarayudu is slated for release on March 24.