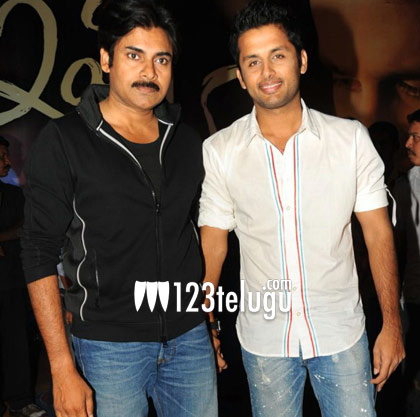 It’s an open secret that Nithin is a huge fan of Powerstar Pawan Kalyan. In fact, he has said quite a few times that he became an actor because of Pawan Kalyan and last year Pawan Kalyan was the chief guest at the audio launch of Nithin, Nithya Menen starrer Ishq. Now, Nithin’s upcoming film Gunde Jaari Gallanthayindhe has a strong Pawan Kalyan connect. Emaindo Emo Eevela, one of the most popular songs in Pawan Kalyan’s career, from the film Tholiprema is going to be remixed in Gunde Jaari Gallanthayindhe. “Hellooo..remixing a song from my POWERSTARS THOLIPREMA film for G.J.G..Emaindo emo eevela!!this song is goin to rock for suure!!Un Dos Tres. Its a huuge challenge for me but m confident that i wont disappoint nebody ..esp powerfans..,” Nithin posted on Twitter.

Gunde Jaari Gallanthayindhe stars Nithin, Nithya Menen and Isha Talwar in lead roles. Vijay Kumar Konda is directing the film and Nikitha Reddy is producing it. I Andrew is the cinematographer and Anup Rubens is scoring the music. The film was recently shot in Abu Dhabi, Muscat and Dubai where couple of songs were filmed on the lead actors.