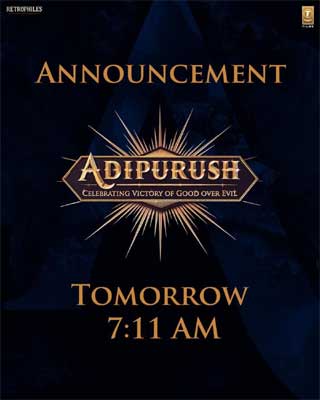 Fans of star hero Prabhas are in for a special surprise from Team Adipurush tomorrow. Prabhas took to Instagram and revealed that a new announcement will be made at 7:11 am tomorrow morning. While the update is still a surprise, speculations are rife that it could be about the actress who will be playing the film’s leading lady.

Until recently, names of several actresses did numerous rounds as the female lead opposite Prabhas in Adipurush. On the other hand, Prabhas had landed in Mumbai after wrapping up Radhe Shyam’s Italian schedule. He has been holding talks with Adipurush’s director Om Raut regarding various aspects of the film.

This epic pan-India mythological magnum opus marks Prabhas’ straight debut in Bollywood. Saif Ali Khan is the main antagonist in the movie. Stay tuned for the big update that’s going to arrive in a few hours.