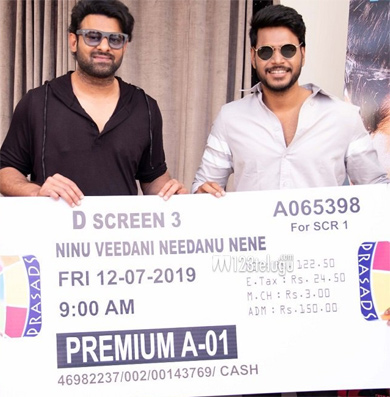 Ninu Veedani Needani Nene is very crucial to hero Sundeep Kishan’s career. Apart from playing the main lead, Sundeep has also turned producer for the film. The film is all set to open in cinemas tomorrow (July 12). The actor has been promoting the film quite aggressively for the last few days.

In a huge boost to the film, star hero Prabhas has purchased NVNN’s first day first show’s ticket. Sundeep and the rest of the film’s core team met Prabhas today and the Rebel Star wished them a grand success. Needless to say, NVNN will now find some patronage from the Young Rebel Star’s fans.

Cararhick Raju has directed Ninu Veedani Needani Nene. Anya Singh is the film’s leading lady. Stay tuned for the FDFS updates for this horror comedy in a few hours.