Prabhu Deva to choreograph a dance number for Chiranjeevi’s next
Published on May 3, 2022 10:00 am IST 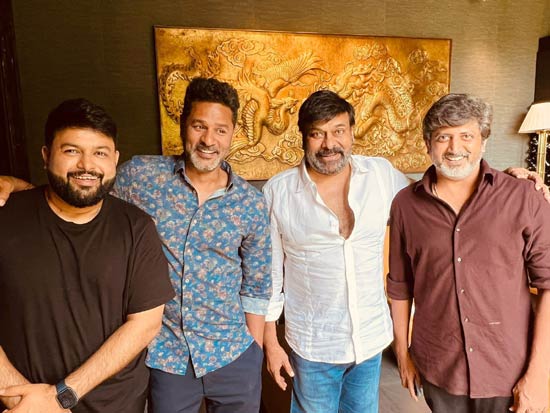 Megastar Chiranjeevi will be seen next in Godfather. Directed by Mohan Raja, the action entertainer has South India’s star actress Nayanthara as the female lead.

The music director of the movie, Thaman S, has revealed an interesting update via Instagram. The news is that popular choreographer Prabhu Deva is roped to compose the dance movements for an energetic song composed by Thaman. Chiranjeevi and Salman Khan will groove to the song. The shoot will happen soon.

Thaman shared a pic of him along with Prabhu Deva, Chiranjeevi and Mohan Raja. The news has become the talk of the town.

Godfather is in the last leg of shooting. Puri Jagannadh will be seen in a cameo. Satya Dev is playing a negative role in this flick, produced by Super Good Films and Konidela Production Company.