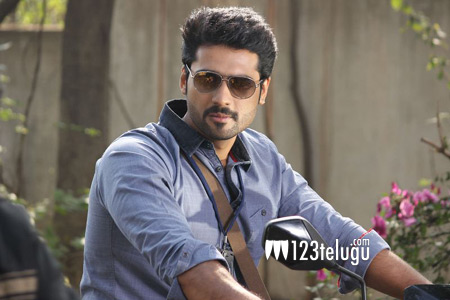 Pradeep who made critically acclaimed short films Advaitam and Amma Paata is looking forward to his new release Maine Pyar Kiya tomorrow. Both his short films were sent to the festivals and the former won a national award. The movie, which is a motivational story about musicians from two different communities won the award in the category for Best Educational film, it was 30-minute film produced by K Vijaypal Reddy on a shoe string budget but none in the film industry acknowledged his contribution.

He says, “I worked as an AD to Chandrasekhar Yeleti and Deva Katta. Those days there was no digital, I short the short movie on film and Amma Paata on digital. I waited for 3 years making effort to do a feature film. People prefer romantic comedy so I weaved this story about love losing its purity and essence. It wasn’t what it was 15 years ago when people considered love as life and would do anything and everything to keep the love alive. Now is the time when the attitude towards love has turned easy and callous. I wanted to pass a subtle message that there should be a balance – one shouldn’t miss life for love and also one shouldn’t lose the value of relationships. To substantiate it I have two love stories in the film, Isha Talwar and Madhumita, Pradeep and Satya Dev play the lead respectively.”

The law graduate from Warangal describes it as a simple, clean story with nice performances, fresh cast. Vishweshwar who worked for DK Bose is the cinematographer and music director is Pradeep. It is a co incidence that the director’s name is Pradeep, the hero’s and also the music director’s.