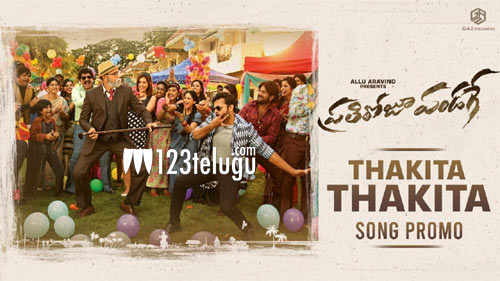 After the hit peppy romantic number ‘Oo Baava’, composer Thaman is all set to unleash his trademark mass beats in ‘Thakita Thakita’, the second single from Prathi Roju Pandage. A short video glimpse of Thakita Thakita was released just a while ago and the full song will be out on November 30th at 10:30 am.

Just like Oo Baava, Thakita Thakita too is shot colorfully and lavishly and even the audio is quite vibrant. While the first single had the family celebrations vibes, the second song will impress those who love mass numbers. The song seems to be shot in a birthday party.

Sai Tej and Raashi Khanna are the main leads in this Maruthi directorial. GA2 and UV Creations banners are jointly producing the movie, which is hitting screens on December 20.