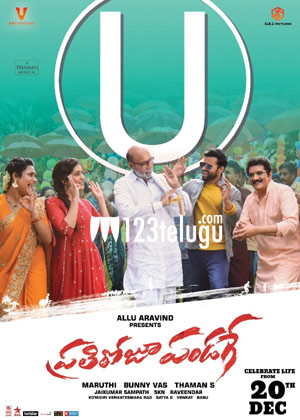 Sai Tej and Raashi Khanna’s upcoming family drama, Prati Roju Pandage, has wrapped up its censor formalities this evening. The CBFC has cleared the film with a clean U certificate and this shows that the film is going to be an out-and-out family entertainer.

Prati Roju Pandage is a tale of three generations. Sai Tej plays an NRI in the movie and Rao Ramesh and Sathyaraj will be seen as his father and grandfather respectively. Thaman has composed the music. This Maruthi directorial is scheduled for a grand worldwide release on December 20.