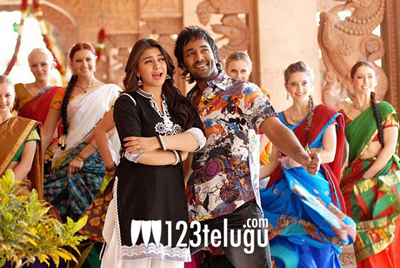 Choreographer Prem Rakshit is famous in the industry for giving unique and ‘special’ steps to heroes. Whether it is Jr. NTR’s step in ‘Nachore’ or Ram Charan’s movements in ‘Bangaru Kodipetta’, his choreography has always been a major asset for heroes.

Now Vishnu Manchu is the latest hero to groove to Prem Rakshit’s choreography and he will be seen doing some special steps in the movie ‘Dhenikaina Ready’. Vishnu is upbeat about the movie and his dances. “After a very long time, I got a chance to showcase my dancing ability in this movie. I must thank Prem Rakshit for his superb choreography. He has given me some tough steps in the film but I enjoyed doing them. I will be recognized as a good dancer with this movie”, says Vishnu.

The movie is getting ready for release on October 24th and the film has been directed by G. Nageshwara Reddy. Hansika will be seen as the heroine opposite Vishnu and this comedy entertainer will have key roles from Brahmanandam and M.S.Narayana.