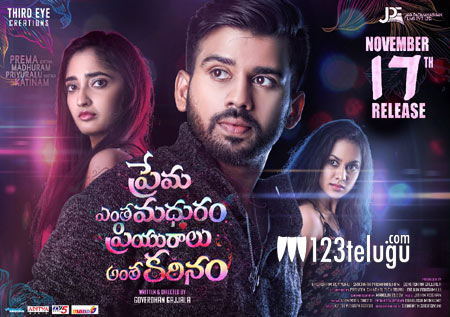 Prema Entha Madhuram Priyuralu Antha Katinam, a romantic, suspense thriller starring newcomers, created a decent buzz with its teaser and trailer. PEMPAK was supposed to release in September, but the makers postponed the movie and they have been waiting for the right release date.

As per the latest update, PEMPAK is slated to hit the screens on November 17. The film is a triangular love story laced with revenge drama. The film was entirely shot in the US. PEMPAK received a positive response from a special screening for industry people.

The film features debutants Chandrakanth, Radhika Mehrotra, and Pallavi Dora as the main leads. Goverdhan Gajjala has directed the film, apart from co-producing it with Raghuram Royyuru.