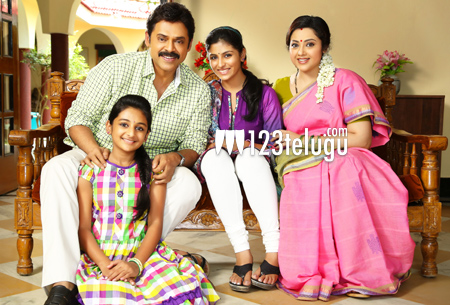 Drishyam is a remake of the 2013 Malayalam Blockbuster of the same title, Drishyam starring Mohanlal and Meena herself. Subsequently , the film was remade in Kannada and met with Super Success. Plans are currently on, to remake the film in Tamil, with Dr. Kamal Hassan in the lead. Nadhiya whose role as the Aunt of Power Star Pawan Kalyan in Atharintiniki Daredi , essays the role of a powerful senior police officer.

The film is about a common man who leads a happy family life. Unexpectedly, their life turns upside down after his family commits a crime. The rest of the story revolves around the father’s all out war, to save his family. The movie has some powerful performances by its lead cast, and is a lovable Family Drama and a gripping Crime Thriller.

The film was shot at the picturesque locations of Araku, Visakhapatnam, Simhachalam, Vizianagaram and some of the most beautiful locations of Kerala. The film is scheduled for a worldwide release on 11 July 2014 in theaters.

Several innovative promotional campaigns have been launched for Drishyam.

A campaign named “My best memories with my father” was launched on June 13, 2014 by Venkatesh and his father D. Ramanaidu. According to its rules, any person can share his or her best memories along with supporting pictures to www.facebook.com/DrishyamTeluguMovie or mail to drishyam.telugu@gmail.com and the winner will have an opportunity to meet Venkatesh in person.

The film’s team also released Twitter #Hash tag #MyDadMyHero and #Drishyam inviting the public to upload selfies of their dad’s to celebrate ‘Fathers Day week’ starting June 15, 2014. For its purpose, a selfie featuring Venkatesh and his son Arjun was released.

A jigsaw puzzle on Facebook as a part of the film’s promotion on June 22, 2014. The game generated a lot of buzz as it allowed users to win prizes every day. To participate, one can log on to bit.ly/DrishyamPuzzle. The puzzle featured several scenes related to the film.