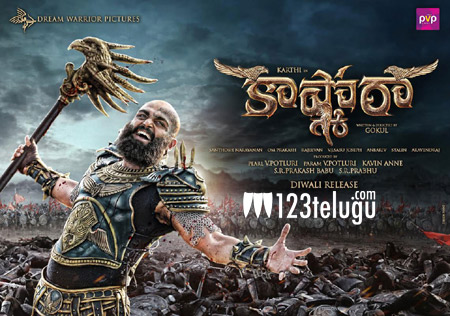 Karthi’s next, a high-budgeted visual extravaganza , ‘Kaashmora’ is all set to hit the screens on October 28th as Diwali gift. ‘Kaashmora’ is Written and Directed by Gokul while produced by Pearl.V.Potluri, Param.V.Potluri,Kavin Anne on PVP Cinemas and AR Prakash Babu, SR Prabhu on Dream Warrior Pictures banners. Nayanatara and Sri Divya will be seen as heroines in this film. Music is composed by Santosh Narayanan. “Kaashmora’ has completed its censor formalities and is awarded with a ‘U/A’ certificate. Makers are planning to release the film on a grand scale in more than 600 theatres all over.

In a press meet held at Hyderabad, Hero Karthi and Producer Prasad.V. Potluri shared some interesting details about the film.

Hero Karthi said , ” Right from the start we know that the Visual Effects plays crucial role for ‘Kaashmora’. Meanwhile ‘Baahubali’ got released and set the new standards for visual effects in Indian cinema. After ‘Baahubali’ ‘s release we stopped shooting for two months and redesigned VFX and some designs before resuming the shooting. 25 VFX companies worked for this film. We shot the entire film in Chennai itself. For this we have rented a Factory for two years and erected 12 sets in it. Art Director Raajeevan has designed these sets with utmost detailing. We also used 3D Face Scan Technology for this film. Director Gokul and his team worked very hard and spent many sleepless nights for this film since the last two years. It’s because of such hard work only, we were able to extract such quality output. Backdrop of Raj Nayak character resembles the periodical episode of ‘Magadheera’. We even designed costumes according to our culture which was influenced by Mughal’s culture. Director Gokul made extensive research for Raj Nayak’s character. He rejected 12 well made designs before finalising costume for Raj Nayak’s character. ‘Kaashmora’ is a perfect festival film mixed with all elements. ‘Kaashmora’ is 60 % filled with humour, satirical comedy while the other 30 % is filled with Horror, Periodical concept. It’s been very tough to show variation between characters. During that time i remembered Kamal Hasan sir who portrayed ten different characters in ‘Dasavatharam’. Playing a character like Raj Nayak is not easy and it has a very different body language. While doing a periodic character, there will be some influence of Legends NTR and Sivaji Ganesan on the character. To avoid such effect Actor Nazar trained me to portray it in a different manner. ‘Kaashmora’ character has satirical comedy while ‘Raj Nayak”s character has periodic backdrop. The connection between these two character is interesting.I dubbed for one of the characters in Telugu. Nayanatara played the role of a Quenn while Sri Divya will be seen in a crucial role. There are no love scenes between me and Nayanatara but we have War Scenes in our combination.”

Producer Prasad.V.Potluri said, ” Unit are still busy in completing the work of the film. This is my second film with Karthi after ‘Oopiri’. ‘Kaashmora’ is a social mass masala entertainer. ‘Kaashmora’ belongs to the league of grand, thrilling films like ‘Arundathi’ and ‘Baahubali’. Film has 1800 shots. For this we have erected 19 sets and did 90 mins of graphic work. Karthi did a fabulous job in showing variation between different characters he played in the film. We are releasing the film in more than 600 theatres in Telugu states and this will be the highest release for Karthi. Film will release in more than 2000 theatres in both Tamil and Telugu worldwide.”