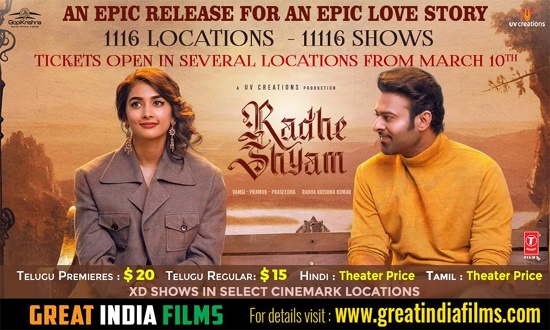 Great India Films has worked hard to secure the best theaters worldwide and is releasing Radhe Shyam in large number of screens to make it An epic release for an Epic film. This is by far the biggest ever release for an Indian movie worldwide.

Latest worldwide theatre lists can be found at www.greatindiafilms.com

Premier shows will start from 3/10 in many countries. Content has been delivered to all the theaters and some theaters hold off on opening tickets till the last minute. However, many theaters have already opened the tickets. Many shows have sold out and theaters are doing the best they can to add shows, however screens are limited. We opened Radhe Shyam in many theaters near you for the convenience to find tickets in at least one of the nearby locations.

Radhe Shyam has chartbuster music, grand visuals and Charismatic Prabhas and Pooja to entertain you on a big screen. Enjoy the biggest war between love and destiny on a big screen near you.

Great India Film thanks all our supporters and movie lovers in our 21 years of journey as overseas distributors.