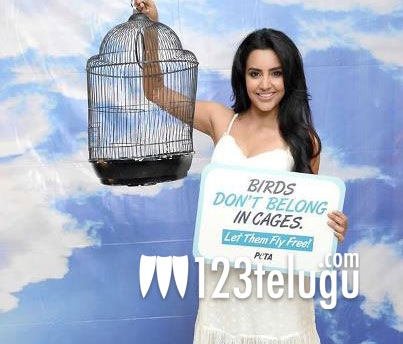 Priya Anand has launched a new campaign for PETA (People for Ethical Treatment of Animals) earlier today in Chennai to protest against caging of birds. Talking to the media, she said, “Birds are born to fly free, and no one should steal their freedom from them. When they are captured and put into cages, smart, sentient, fun-loving birds become depressed and withdrawn.” The ad campaign has drawn good response from people already and Priya Anand is being lauded by her fans for supporting such good initiatives. Back in May, she had supported PETA’s campaign to stop killing street dogs in Chennai. Meanwhile, she’s currently busy shooting for her upcoming Tamil film Edhi Neechal and she’ll soon join the sets of Ko Ante Koti in which she’s paired up with Sharwanand. Apart from these two films, she’s also playing one of the lead roles in an upcoming Farhan Akthar’s production titled Fukhrey. Looks like 2012 is going to be an unforgettable year for Priya Anand who bounced back strongly with her performance as Sridevi’s niece in English Vinglish.