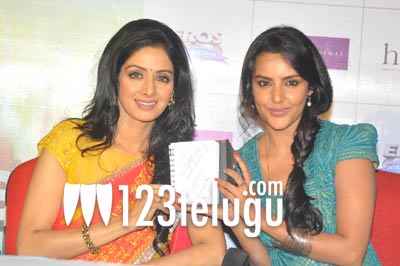 Priya Anand’s lifelong dream has finally come true. Ever since she became infatuated with Sridevi’s films, she revealed, she dreamt of meeting her one day in future and get her autograph. She was on cloud nine when Gauri Shinde cast her in an important role in Sridevi’s comeback film English Vinglish. Talking at the film’s trailer launch today, Priya Anand said, “I didn’t have the courage to ask her for an autograph inspite of spending a lot of time with her on the sets of the film in New York. I am not sure when I might her meet her again. So, I take this opportunity to ask her for the autograph infront of all of you.” She couldn’t stop smiling when Sridevi obliged to her request. “I finally got an Autograph from @SrideviBKapoor 😀 Waited all my childhood for this day! Thank U @EnglishVinglish My Reason to :).. Urs?,” she posted on Twitter moments after the press meet was wrapped up. Apart from English Vinglish, Priya Anand will soon be seen in Priyadarshan’s Rangrez and Anish Kuruvilla’s Ko Ante Koti.