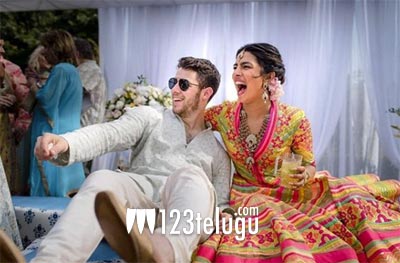 Priyanka Chopra got married to Nick Jonas, her American boyfriend, earlier today as per the Catholic tradition. As per some reports, Jonas brothers, Kevin and Joe along with Priyanka Chopra’s brother Siddharth Chopra were the groomsmen, Isha Ambani, Arpita Khan Sharma and Parineeti Chopra were the bridesmaids at the ceremony.

Incidentally, the couple will also tie the knot soon as per the Hindu tradition. The entire family of Nick Jonas and Priyanka flew to Jodhpur recently, and the festivities have already begun. Praising Nick’s family for respecting the traditions and culture, Priyanka stated that one of the best things about their relationship was the merging of families who respect and love each other’s culture and faiths.

Recently, the couple posed for the cover shoot of Vogue magazine, and spoke about their love story in great detail. Not surprisingly, the story has now gone viral. Now that Priyanka is married to Nick Jonas, it remains to be seen how she splits her time between her work in the US and in India.

One of the most special things that our relationship has given us is a merging of families who love and respect each other's faiths and cultures. And so planning our wedding with an amalgamation of both was so so amazing. An important part for the girl in an Indian wedding is the Mehendi. Once again we made it our own and it was an afternoon that kicked off the celebrations in the way we both dreamed. @nickjonas