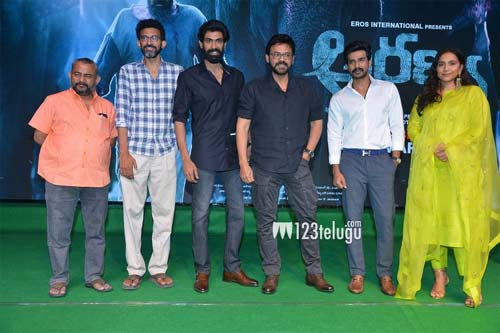 Eros International’s latest multilingual pan-India film, Haathi Mere Sathi, is releasing as Aranya in Telugu. The movie hits screens on the 26th of this month across the world. Victory Venkatesh and director Sekhar Kammula attended the pre-release event of the film in Hyderabad this afternoon.

Speaking at the event, Venkatesh said that he watched Aranya yesterday and that he was bowled over by the film. “It is a film that has come at the right time, teaching the importance of co-existence with the nature. I thank Prabhu Solomon for it. I am really proud of the way Rana has come all this way. His performance is stunning and he is outstanding in the film. Everyone got immersed in their characters and the story,” Venky said.

Rana Daggubati said, “We will transport you to a rain forest on the 26th. During the course of making this film, I transformed into a better human being. I am proud of doing such a film which will showcase the ill-effects of urbanization on elephants and jungles. We are planning special premieres for the press ahead of the film”.