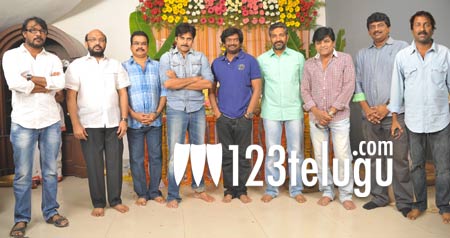 Puri Jagan is creating a unique trend these days in the Telugu Film Industry. He has announced the release date of Mahesh Babu’s ‘Businessman’ during the muhurtam puja itself and he lived upto his word. Now, he has announced the release date of Pawan Kalyan’s ‘Cameraman Ganga tho Rambabu’ on the muhurtam date itself. “Pawan’s movie will release on the 18th of October and I am very happy to work with Pawan Kalyan for my 25th film”, announced Puri Jagan.

The movie was formally launched today in Puri Jagan’s office and ace director Rajamouli gave the honorary clap. Sources say that Kajal is being considered for the female lead but there is no official confirmation over this yet.