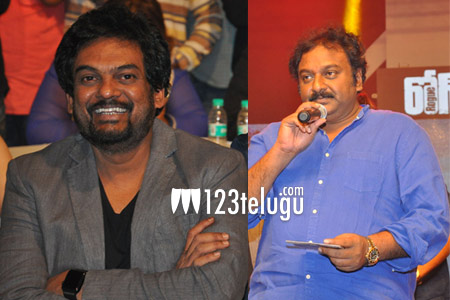 Newcomer Ishaan is the toast of the town these days and Puri Jagannadh is leaving no stone unturned to praise the actor, who’ll be making his acting debut with ‘Rogue’. Few days ago, Puri Jagannadh went gaga over the actor’s looks and he even compared him with the effect that Sridevi had on him and now, he has praised the actor once again at the audio launch.

Speaking at Rogue’s audio launch, Puri Jagannadh said, “My first film Badri producer Trivikrama Rao garu said that I would do fifty films as a director after watching me on my first day on the sets of Badri. Likewise I am pretty confident that Ishaan would do fifty films as an actor. I hope he continues to act, for the next 20 years, with the same amount of dedication that I saw on Rogue’s sets.”

Likewise VV Vinayak, who was another guest at the event, praised Ishaan saying, “Ishaan looks quite promising and I liked him in all the promos so far. I’m confident that he’ll be a top hero in future.” The film also stars Mannara Chopra and Angela Krislinzki in lead roles and it’ll release in Telugu, Tamil and Kannada later this summer.