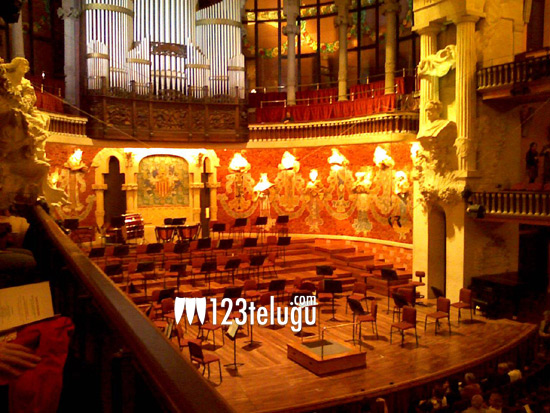 Puri Jagannadh’s upcoming film Iddarammayilatho is currently being shot at various locales in Barcelona. Allu Arjun is playing the lead role in this action and romantic entertainer and Amala Paul, Catherine Tresa are the lead actresses. The film unit had earlier shot near Barcelona Cathedral and the latest news is that Puri Jagannadh’s team managed to secure permission to shoot for a day at The Palau de la Música Catalana, a magnificent concert hall in Barcelona.

Iddarammayilatho is the first Telugu film to be shot in this concert hall which has a history of more than 100 years and is a UNESCO World Heritage site. The concert hall has hosted several prominent musical performances in the past and it’s considered to be the one of the most beautiful buildings ever built in Barcelona. Bandla Ganesh is producing the film and he’s leaving no stone unturned to make Iddarammayilatho a huge hit. Devi Sri Prasad is scoring the music and Amol Rathod is the cinematographer.