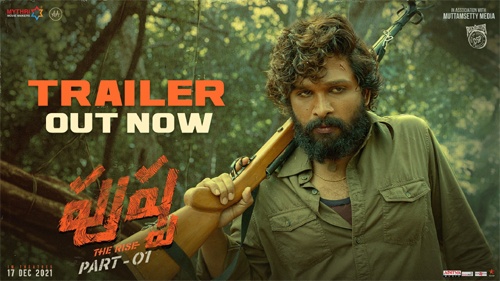 The highly-anticipated trailer for Allu Arjun and Sukumar’s pan-India action drama, Pushpa The Rise, has been launched just a while ago. The trailer is grand in every aspect and loaded with high octane action coupled with a solid plotline. The Bunny-Sukumar duo has succeeded in taking the expectations on this crazy project to the next level with this terrific trailer.

Sunil and Anasuya also make their presence felt with their powerful act in negative roles. Fahadh Faasil is only limited to the last shot of the trailer, but be assured, he will pack a solid punch as a tough cop in the movie. DSP elevates the drama with his riveting background score. This Mythri Movie Makers and Muttamsetty Media joint production is slated to open in cinemas worldwide on December 17.