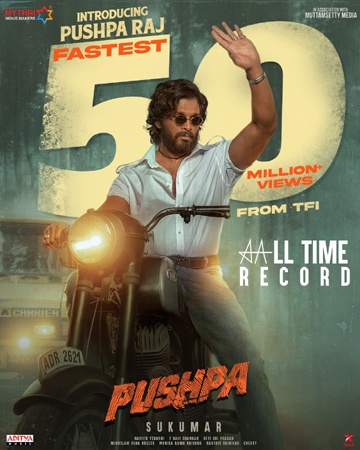 The teaser for Allu Arjun and Sukumar’s highly-anticipated action drama, Pushpa, was launched on April 7, on the occasion of the actor’s birthday. Fans gave the teaser a collective thumbs up. And within three weeks, the teaser has set a new Tollywood record.

Pushpa’s teaser has clocked 50 million YouTube views, which is the fastest ever for any Telugu movie teaser. Allu Arjun’s rugged and massy avatar as Pushpa Raj, the action-packed visuals and DSP’s terrific background score were the main highlights of the teaser.

Pushpa also features Mollywood star Fahadh Faasil and Rashmika Mandanna in lead roles. The film is being produced under Mythri Movie Makers banner in association with Muttamsetty Media banner. Pushpa is slated to open in cinemas on August 13.