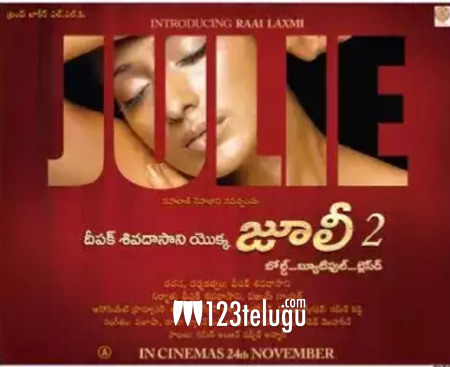 Ravishing beauty Raai Lakshmi’s maiden Bollywood film, Julie 2, has been making headlines ever since the film’s trailer was unveiled a few months ago. Raai Lakshmi’s ultra glamorous avatar will set the screens ablaze

Julie 2 is hitting the screens on November 24 across the country. The latest update is that the film is going to be dubbed in Telugu and release simultaneously. Julie 2 will also release in Tamil and Malayalam versions.
Deepak Shivdasani is the film’s director, while controversial censor chief Pahlaj Nihlani, Vijay Nair and Deepak Shivdasani produced the movie jointly.