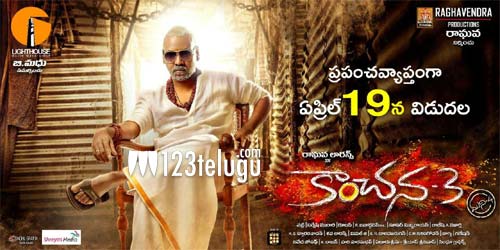 After a brief lull at the box-office, starting from the third week of March, there are going to be a bunch of films releasing every week. With films like Lakshmi’s NTR, Arjun Suravaram, Majili, Jersey, and Chitralahari already vying for audience’s attention till mid-April, now Raghava Lawrence’s Kanchana 3 too has joined this race for summer box-office.

The film’s shoot was wrapped up a while ago; however, the makers were keen to release it in summer owing to the popularity of the franchise. The film stars Raghava Lawrence, Vedhika, Oviya, and Nikki Tamboli in lead roles, and it’s confirmed for release on April 19.

The previous two films from the series were hugely popular in Telugu and Tamil, and it expanded Lawrence’s market in a big way. Now, it remains to be seen if Kanchana 3 too can repeat the magic or not.