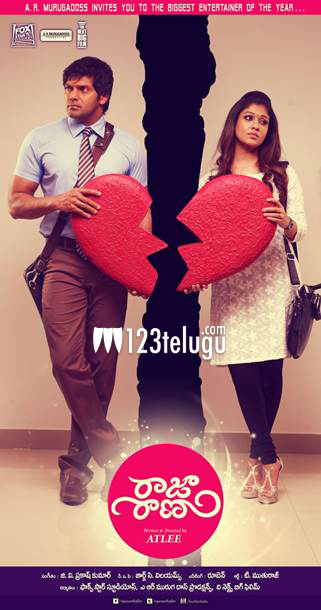 Arya, Nayanthara starrer Raja Rani was one of the biggest hits of 2013 in Tamil cinema. Directed by Atlee, the film was co-produced by A R Murugadoss and Fox Star Studios. The film grossed nearly Rs 50 crores and Nayanthara made a stunning comeback in Tamil with this film.

Now, the film is all set to be dubbed in Telugu and the title has been retained for the Telugu version as well. The first teaser of the Telugu version will be revealed on February 14. Talking about the film, A R Murugadoss said, “We are confident that the film will repeat its success story in Andhra Pradesh as well. Atlee has done a tremendous job at capturing emotions in a marital relationship.”

Jai and Nazriya Nazim have played important roles in this romantic entertainer. G V Prakash has scored the music. The film is expected to hit the screens in March.