Rajamouli pens a heartfelt note after Naatu Naatu gets nominated for Oscars
Published on Jan 25, 2023 12:05 am IST 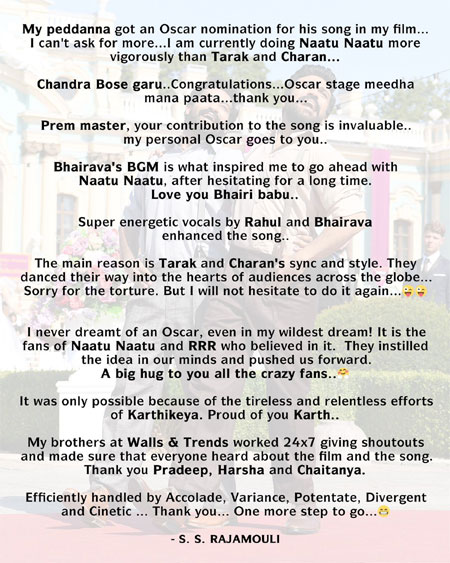 The Indian film fraternity is busy congratulating the RRR team as Naatu Naatu bagged the nomination for Best Original Song. Film director Rajamouli has penned a heartfelt note expressing his gratitude for all those who were part of the glorious journey.

At first, he mentioned Keeravani, who composed the song, and said he is now doing Naatu Naatu more vigorously than the lead actors. He then thanked the lyricist Chandra Bose, and dance master Prem Rakshit for their outstanding contribution. Rajamouli then wrote about Kaala Bhairava and Rahul Sipligunj, whose vocals enhanced the song.

Tarak and Charan danced their way into the hearts of audiences across the globe, said Rajamouli. The sensational director thanked fans and added that they were the ones who instilled the idea in their minds and for pushing their team forward. Rajamouli extended his thanks to Karthikeya, team Walls & Trends, and all others who lent their support.