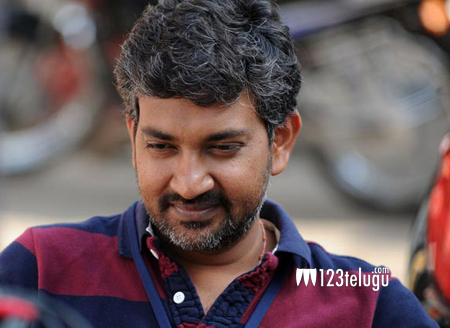 S.S.Rajamouli is the most successful director in TFI. He has pushed the boundaries of Telugu cinema with his last project, ‘Eega’. But his detractors argue that Rajamouli takes way too much time to complete his projects. This is not a very valid argument as his Box Office performance has always managed to justify the time and money spent on the projects.

However, for his upcoming film ‘Baahubali’, Rajamouli seems to be working at a good pace. He has just informed his followers on Twitter that a scene was wrapped up 2 days ahead of schedule. The news was greeted with enthusiasm by Prabhas’s fans. ” For the first time in my career I completed a scene much earlier then scheduled. Planed for 5 days, finished in 3 days 🙂 “, he tweeted.

Young Rebel Star Prabhas and Rana Daggubati will be seen as brothers in this period action adventure. The movie is being produced by Arka Media banner and M.M.Keeravani is handling the music. Anuskha will be seen as the female lead in this film.