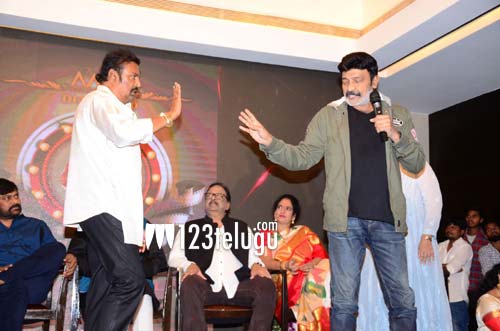 The calendar launch of Movie Artists Association turned out to be a ruckus as Rajasekhar got all angry and created a scene and even walked out of the proceedings.

It is a known fact that Naresh is the president of MAA and Rajasekhar is the vice president and they have been having differences from the past few months in running the association.

Today, things began on a simple note with Paruchuri Gopala Krishna talking about the association as to how every family has problems and they solve it internally. Chiranjeevi also added a few lines about it.

This did not go well with Rajasekhar who stormed the stage and started talking violently. He said that there are serious issues in the association and one needs to address it right away. Rajasekhar also told that he has been having sleepless nights because of the association.

Rajasekhar went on to add that this pressure has even lead to the accident which he suffered recently. Seeing the rage of Rajasekhar, Chiranjeevi got very angry and asked for severe punishment for Rajaekshr. Even after all this, Rajaekhar went to create a ruckus and left the event.