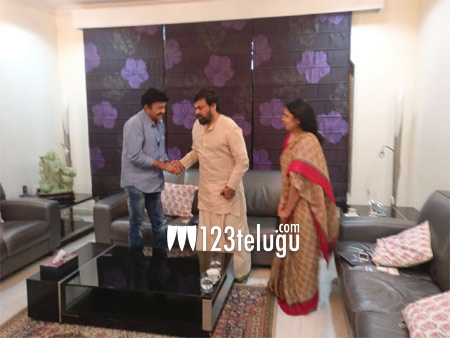 Senior hero Rajasekhar is leaving no stone unturned to get maximum visibility to his upcoming action thriller, Garuda Vega. The film is hitting the screens on November 3. Made with a budget of 25 crores, Garuda Vega impressed everyone with its spectacular trailer.

Now, the latest hot news is that Rajasekhar, along with his wife Jeevitha, visited Megastar Chiranjeevi at the latter’s residence and invited him to Garuda Vega’s premiere, which will take place on November 2. Chiru cordially greeted the senior star couple and even enquired about the movie.

Praveen Sattaru has directed Garuda Vega and Koteswara Raju has produced it. Pooja Kumar, Shraddha Das, Kishore and Nasser play important roles in the movie. Sunny Leone will be seen sizzling in a special song.