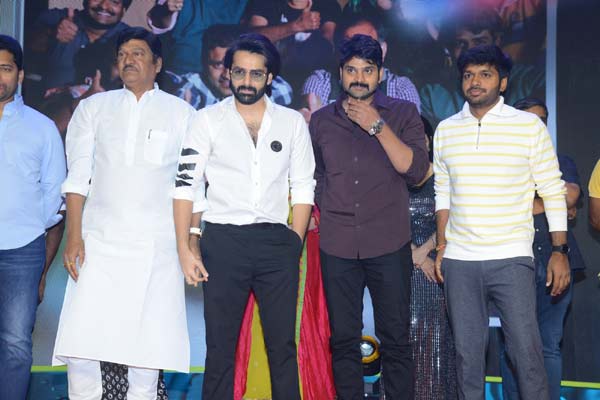 Hero Sree Vishnu was visibly emotional during his speech at tonight’s pre-release event of his upcoming comedy drama, Gaali Sampath. Sree Vishnu said that he feels fortunate to have played a role in a miraculous story like Gaali Sampath and that too by sharing screen space with a legend like Rajendra Prasad.

“Rajendra Prasad garu is world’s best acting institute. He taught me several tricks and tips of acting and I’m going to copy (use) them all in my future movies. I’m confidently saying that audiences will see a different Sree Vishnu in all my future movies,” Sree Vishnu said. The actor went on to say that people who have their hearts in the right place will surely salute to Rajendra Prasad’s acting in the climax scenes.

Directed by Anish Krishna and produced by S Krishna, Harish Peddi and Sahu Garapati, Gaali Sampath has Lovely Singh as the film’s leading lady. The film is opening in cinemas on March 11. Anil Ravipudi is presenting the movie.