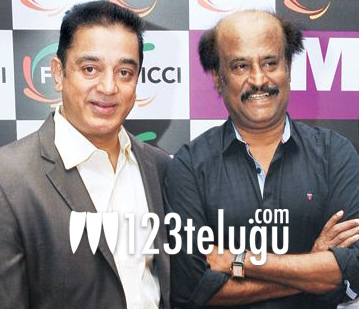 Rajinikanth and Kamal Haasan have been friends for over three decades. In fact, Kamal Haasan played the lead role in Rajinikanth’s debut film Apoorva Ragangal, which was directed by K Balachander. In the late 70s, the two acted together in quite a few films before Rajinikanth became a big star. Of late, there have been several rumours that the two might team up once again for a Tamil film which will be directed by one of the veteran filmmakers in Tamil cinema. When Kamal Haasan was recently asked if the two are planning to act together, Kamal Haasan categorically denied the rumours. “A film starring both Rajinikanth and me will be too costly for any producer in South. I don’t see it happening anytime soon and I doubt if it’ll happen ever again,” Kamal Haasan said. Rajinikanth has become extremely selective about his projects and he’ll soon be seen in Soundarya Rajinikanth’s Kochadaiyaan and after that there are chances that he’ll act in a KV Anand’s film. On the other hand, Kamal Haasan is busy promoting his upcoming film Vishwaroopam and he’s gearing up to make his debut in Hollywood sometime in near future.