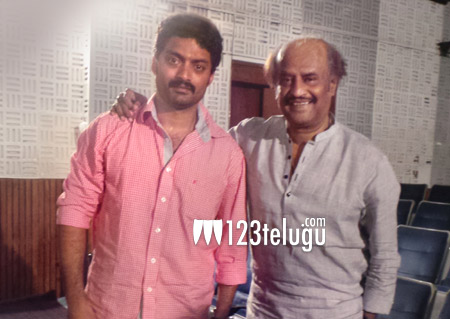 Kalyan Ram’s upcoming film OM (3D) has found a big admirer in none other than Superstar Rajinikanth. Recently, Kalyan Ram screened the film for Rajinikanth and after watching the film, the Superstar praised Kalyan Ram and his team for making a superb film.

“Om is one of the good commercial films I have seen in recent times. I felt that they made a great 3D film within a budget of Rs 25 crores and it’s almost on par with Hollywood standards. Kalyan Ram’s performance and action sequences are really good. I congratulate the entire team for making such a good film,” Rajinikanth said. Responding to Rajinikanth’s comments, Kalyan Ram said, “I am extremely delighted that an actor like Rajinikanth has appreciated our efforts and I’m all the more confident about the film now.”

Kriti Kharbanda and Nikesha Patel are the lead actresses and Sunil Reddy has directed it. Kalyan Ram has produced it under NTR Arts banner. The film is going to hit the screens on July 19.