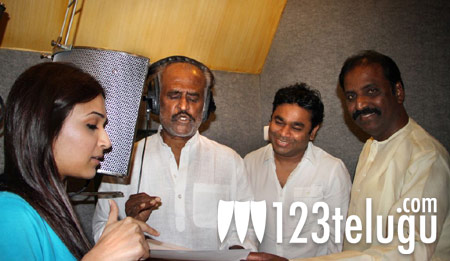 Rajinikanth has sung a song for his upcoming film Kochadaiyaan. The song was penned by veteran lyricist Vairamuthu and it was recorded on March 11. AR Rahman, Soundarya Rajinikanth and Vairamuthu were present in the recording session along with Rajinikanth. It’s the first time in 20 years that Rajinikanth’s fans will hear his voice in a song. Back in 1992, he had sung a song in a film titled Mannan. Rajinikanth will join the film’s shooting from March 21 onwards in London and he’s reportedly quite excited about the film. Soundarya Rajinikanth is going to direct the film and Eros International, Ocher Studios are co-producing the film. Deepika Padukone is playing the lead role in the film. Interestingly, Rajinikanth’s son-in-law Dhanush sang the song ‘Why this kolaveri di’ in December, 2011 and that became a viral sensation. It’s a matter of time before this song featuring Rajinikanth is unveiled to create another sensation.