Last night, millions of fans were left anxious when reports of Kollywood Super Star Rajnikanth’s hospitalization went viral in the media. However, Rajini’s publicist had informed the media that the legendary actor was admitted to Kauvery Hospitals in Chennai only for routine check-ups.

This afternoon, the Kauvery Hospitals management issued a bulletin on Rajini’s health condition. The doctors informed that Rajini was hospitalized following an episode of giddiness. “He was thoroughly evaluated by the expert panel of doctors and advised to undergo Carotid Artery revascularization. The procedure was performed successfully today (29th October, 2021) and Rajini is recovering well. He is likely to be discharged from the hospital after a few days,” the bulletin read.

Carotid Artery revascularization is a process to remove plaque from the inside of carotid artery in order to restore normal blood flow to brain. Rajini’s highly-anticipated action entertainer, Annaatthe, is scheduled for a big release on November 4, as a Diwali festive treat. 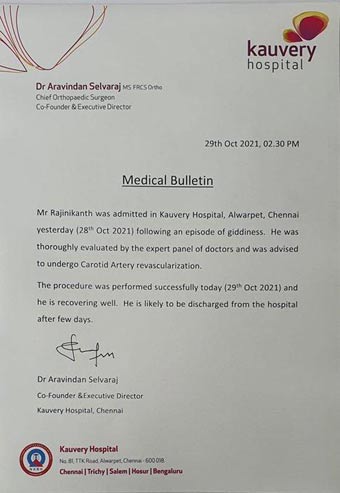