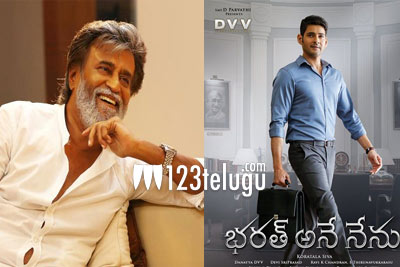 Superstar Mahesh Babu’s Bharat Ane Nenu is turning out to be the biggest hit in the actor’s career. This Koratala Siva directorial is an intense political thriller and Mahesh played the role of a Chief Minister in it. The film gained more prominence, thanks to the election fever that engulfed the entire country.

Meanwhile, the latest buzz in Tamil film circles is that stalwart Tamil actor Super Star Rajinikanth is going to watch Bharat Ane Nenu very soon in Chennai. Already, speculations are rife that Bharat Ane Nenu will be remade in Tamil, and fans of Rajini, Vijay and Ajith are hoping to see their favorite star in the lead role.