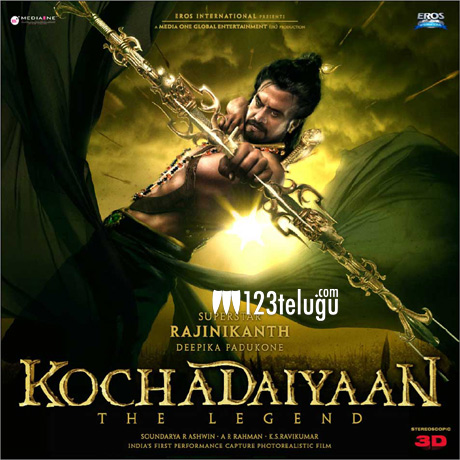 The promotional campaign for Rajinikanth’s upcoming film Kochadaiyaan has kicked off in style. Soundarya Rajinikanth has directed the film and it also stars Deepika Padukone in the lead role. Eros International has co-produced the film.

The latest news is that the theatrical trailer of Kochadaiyaan has been censored and Soundarya Rajinikanth is quite excited about it has shaped up. Last year, when the film’s teaser was unveiled on the internet, it went viral instantly. Although the film has been shot using motion capture technology, Rajinikanth’s trademark mannerisms have been kept intact. Going by the previous track record, it wouldn’t be surprising if the trailer also becomes a sensation among the audience across the country.

The film’s music is going to be launched in Chennai on March 9, whereas the entire team is expected to be present for the Telugu version’s audio launch on March 10 in Hyderabad. A R Rahman has scored the music. Vikramsimha is the film’s title in Telugu and Rajinikanthn has played dual roles in the film. The makers are planning to release the film on April 11.