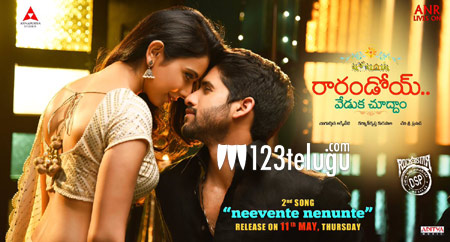 The title song from the film Rarandoi Veduka Chooddam has become a huge hit within no time. Now, the second romantic track from the film will be out tomorrow. Devi Sri Prasad composes music for this family drama which is eagerly awaited.

The new poster which was launched today looks superb and showcases amazing chemistry between the lead pair. Rakul looks ravishing in a traditional outfit whereas Chaitanya is deeply in love with her.

Kalyan Krishna is directing this film after the success of Soggade Chinni Nayana. Nagarjuna produces this film on his home banner.