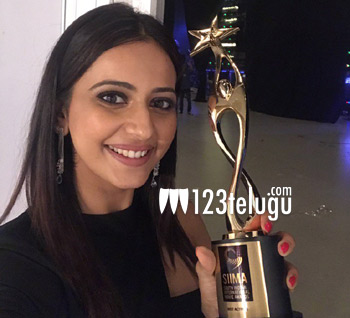 Gorgeous beauty Rakul Preet Singh is one of the top league actresses in Tollywood in the present generation. Recently, Rakul bagged her first ever Best Actress award, and needless to say that she’s absolutely thrilled about her achievement.

Rakul was honored with the Best Actress trophy for her performance in Nannaku Prematho at the recently concluded SIIMA Awards in Abu Dhabi. Prior to this, Rakul was nominated thrice for Best Actress in Filmfare Awards. Rakul’s next Telugu outing will be Boyapati’s Jaya Janaki Nayaka.

Thankuuuu @siima once again for an amazing Show !and an even bigger Thanku for my first best actress award ! 😊🙏 pic.twitter.com/VRqAPUANrK