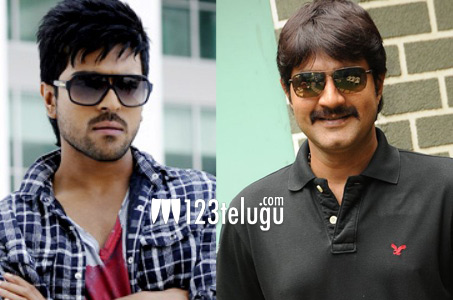 Mega Powerstar Ram Charan and veteran hero Srikanth are participating in the shooting of their upcoming family drama. A few fight sequences are being shot on Charan and Srikanth along with some fighters.

The movie unit is expected to continue shooting in Kerala and Tamil Nadu until the end of the month. Krishna Vamsi is the director of this movie and Bandla Ganesh Babu is the producer. The film’s first look and title might be revealed by the team on Ram Charan’s birthday, in a few weeks .

Thaman is composing the music for this movie. Kajal Aggarwal and Kamalinee Mukherjee will be seen as the heroines. The movie will release in the second half of 2013.