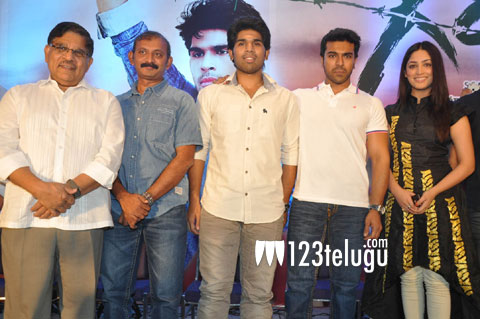 Allu Arjun’s younger brother Sirish is all set to make his acting debut in Radha Mohan’s upcoming bilingual film Gouravam. The film is going to hit the screens on April 19 and the promotional campaign began recently for both Telugu and Tamil versions. The audio was launched by Nagendra Babu in IPL Stadium and Sirish, Yami Gautam, Prakash Raj and Thaman graced the event and now, the first trailer of the film was launched by Ram Charan earlier today in Hyderabad. “When it comes to suggestions, I take Sirish’s suggestions quite seriously just like how my father (Chiranjeevi) takes my uncle Allu Arvind’s suggestions. I wish Sirish all the best for his debut,” Ram Charan said.

Gouravam is based on the theme of honour killings and how a city boy inspires the people to revolt against this social evil. Yami Gautham is playing the role of a young lawyer and Prakash Raj has also played a crucial role. Thaman has scored the music and Preetha is the cinematographer.