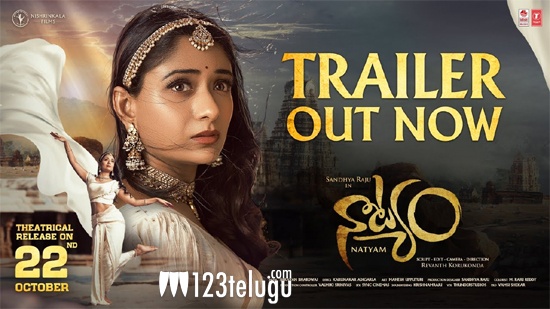 Hero Ram Charan is the chief guest at the pre-release event of the upcoming dance drama, Natyam. During the event, Charan launched the film’s theatrical trailer. Charan, who has already watched the movie, was all praise for it and said he thoroughly loved the movie in all aspects.

Natyam’s trailer showcases the insisting story of a Kuchipudi dancer named Sithara (Sandhya Raju), who goes against all odds to learn dance and perform the story of Kadambari. Protagonist Sandhya Raju, who is a noted Kuchipudi dancer herself, is making her debut as an actor, producer, choreographer, production designer and costume designer Natyam. Going by the trailer, Sandhya has delivered a mesmerizing and impactful performance through her acting, expressions and of course, dance.

Kamal Kamaraju, Rohit Behal, Aditya Menon, Subhaleka Sudhakar and Bhanupriya play crucial roles in Natyam. Revanth Korukonda is making his debut as a director, cinematographer and editor with this movie. Talented young composer Shravan Baradwaj has composed the music. Natyam is slated for its theatrical release on October 22.