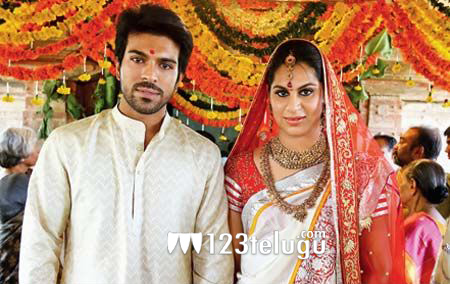 Mega Power Star Ram Charan and his wife Upasana celebrated Vinayaka Chavithi in the City of Destiny, Vishakhapatnam, and sought blessings from the popular local Ganesh temple located in Asilmetta. They went to the temple at 7 AM for their special pooja and later worshipped a 45 foot statue of Ganesha in Gajuwaka, made out of rice.

Ram Charan said that it brought him great happiness to celebrate this auspicious festival in the city of Vishakhapatnam. He also said that he was in the city for the shooting of Vamsi Paidipally’s ‘Evadu’.

This is the first Vinayaka Chavithi for Charan and Upasana after they married and that made it extra special for them. Charan has a busy year ahead , with multiple projects in Telugu and Bollywood.