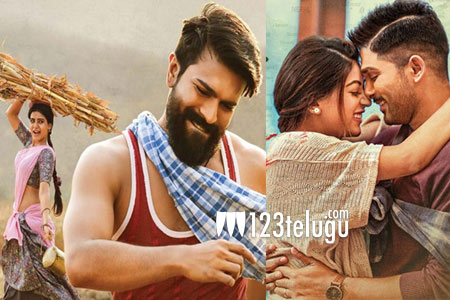 The competition between the mega heroes is going great guns with each passing day. If one hero is coming up with a good film, the others are trying hard to win appreciation with their performances and characters.

Two such heroes who are working day and night to present themselves in a new manner are Allu Arjun and Ram Charan. Both the heroes have been in top form in terms of their films and characters.

Both Charan and Bunny will be seen in two really interesting avatars in Rangasthalam and Na Peru Surya respectively. These two films will be released in a few weeks gap and promotions are on in full swing.

The audio songs of both the films are coming out one after the other and fans are doing their bit to promote their stars. But now, among the two songs released, Charan’s Yenta Sakkagunnave has raced ahead of Bunny’s Lover Also Fighter Also with more than 4 million hits when compared to the 1.4 million YouTube hits for Bunny’s song.

Even lyrics wise too, Rangasthalam’s song is being appreciated for its poetry and depth. Somehow, the buzz for Rangasthalam is a tad high as it is a Sukumar project whereas Na Peru Surya is being directed by a debutante Vamsi.

The war is definitely on and as of now Charan has a clear advantage on Bunny. Let’s see how the coming days will turn out to be for these star heroes.